The nights grow short and the darkness never quite settles. That’s what Swedish summers are like. While winter is nothing but an endless darkness, our summers are light and the nights are short. This has been a time for celebration dating all the way back to the time of the Vikings. Midsummer (or Summer Solstice) has always been celebrated in Sweden, and while it’s also the day of John the Baptist, this was celebrated long before Christianity reached this area.

Originally Midsummer was celebrated to worship and pray to the Norse Gods of fertility, Frey and Freya. Lambs were offered and there were big celebrations, in the hope that this would please the Gods and the crops would grow and the women would bear children. 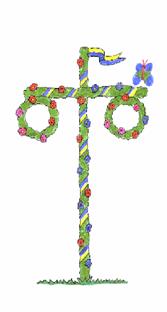 These days it’s quite naturally not like that. It’s more of a holiday where family get together to eat something nice (usually BBQ and later on there should always be a strawberry cake!) and meet. Or some people (usually the younger generation) go to the campings along the coast where they celebrate by getting really, really drunk 😉

On midsummer you will see a lot of midsummer poles. Basically a pole, looking somewhat like a cross dressed in leaves and flowers. You’re then supposed to dance around it, but these days that doesn’t happen as much as it did only 100 years ago. Back then it was a great place for people to meet 🙂

Midsummer is also a time for old superstitions (which we have a lot of in Sweden, even if we no longer believe in them.. remember our Easter celebrations?!). For example, it is said that a girl should walk across the fields before darkness falls and collect seven flowers, one of each kind and not more than one on each field. She has to pick them in complete silence, and when she returns home she’s to put them under her pillow, and she will then (hopefully) dream about the man that she will eventually marry.

Then you have the old folklore telling us of Näcken (a Water Spirit) who would normally spend his time in the rivers, playing his violin and trying to entice people to him. He would then capture them and bring them down to the bottoms of the river with him, and they would never escape. On Midsummer’s Eve he was able to disguise himself as a man, a violin player (hint, anyone?), who would come and offer to play at the celebrations. It was important to deny him, because if you danced to his playing on this night you were never able to stop, but you would dance until you died and he would collect you. (In some stories it was the devil instead, but since the Water Spirit’s origin is older, I’m tempted to say he was the one in the original stories.)

There was of course a way to determine if it was a real violin player, or if it was the Water Spirit. If you took a good look you’d notice that one of his feet was in fact a hoof!

Well, that’s some basic information on Midsummer in Sweden 🙂 Personally I celebrated it by having a BBQ with my family, and my grandma had made a very delicious strawberry cake!

A personal blog about life in general. It's also about finding the way back to writing after a ten year gap during which I had a burn out, learned to cope with chronic fatigue and pain - and moved countries (twice!). Want to know more? Check my about page!